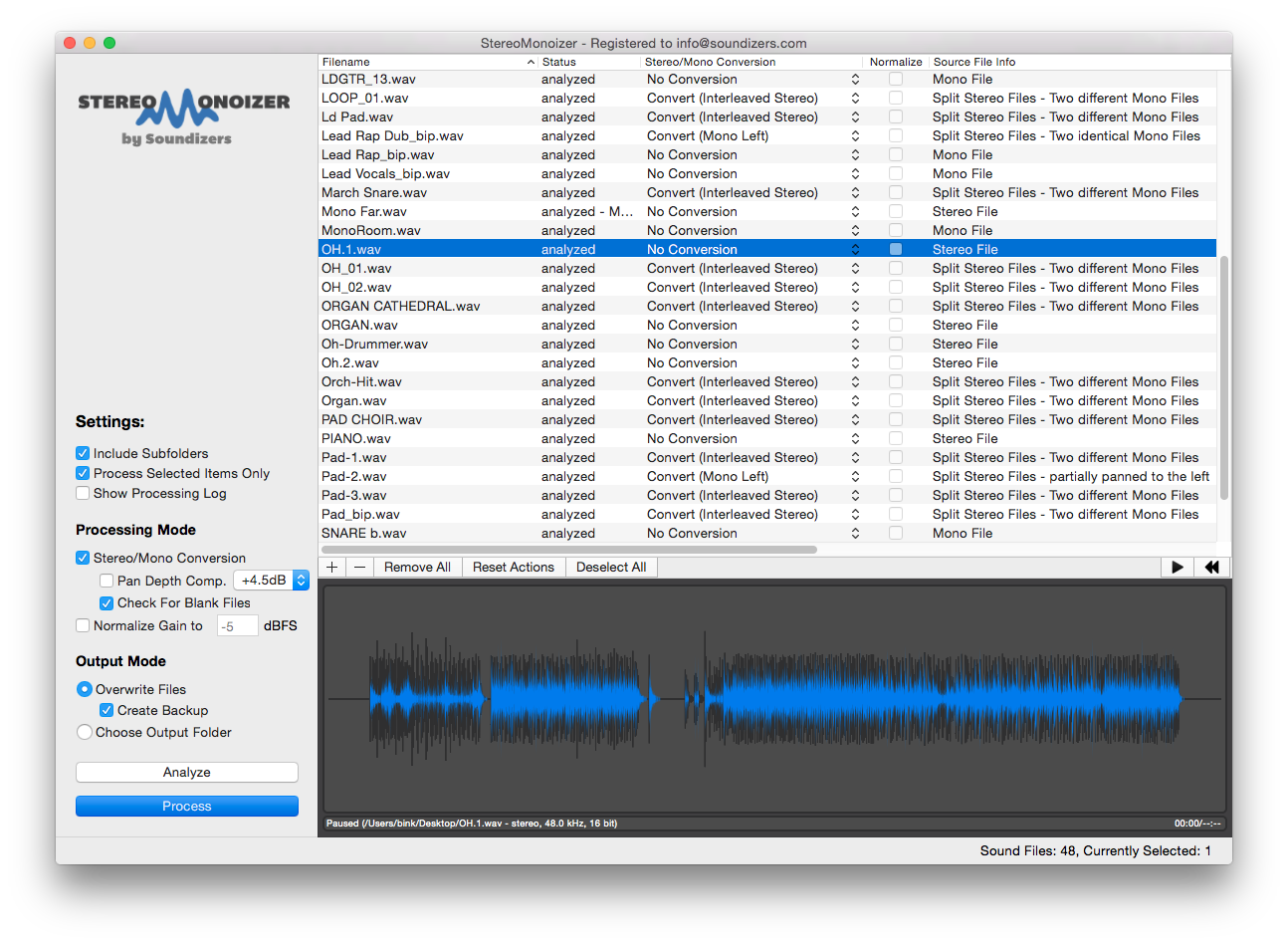 It seems like the difference between mono and stereo files should be a simple one. Mono files contain a single channel, and stereo files are made up of two channels. So why write a blog post about it?

Well, it’s not quite that simple. As a mix engineer, what do you do with these files? Should you simply trust that the audio actually matches the format of the file? We know that a stereo file has two channels. But if the audio content of both channels is identical, you actually have a mono sound. Or if one of the sides is blank, you essentially have a mono sound panned to one side.

So it’s clear that some of your “stereo” files could potentially contain mono audio. But what should you do about it?

You have a few options here. First, you could do nothing. Just import the files into your DAW and mix away, oblivious to the mono or stereo content of each of your files. This is probably the easiest way to deal with it from a preparation standpoint because you don’t have to spend any extra time preparing your mix files. You just import and start mixing.

The problem with this method is that you are severely limiting the capabilities of your DAW. If you think about it, since a stereo file has two channels, both need to be processed by plugins. So for each mono sound in a stereo file, you are using double the CPU power for each plugin that you put on those channels. In addition, if your DAW has a limited number of voices, you are using two voices per channel, instead of one.

Let’s do a quick case study as a very generalized example. Let’s say you are mixing a session with 50 tracks, and you received them all as stereo files. That means your DAW is using 100 voices (2 voices per track). During the course of your mix, you end up adding 1 plugin on each channel, and each of those plugins takes up 1% of your CPU usage per voice. If you do the math, this session would use up 100% of your CPU usage, and you would be unable to continue.

Now, let’s say half of those 50 tracks were actually vocals, or drums, or guitars, all of which could potentially be mono sounds. Remember, even though the files were sent to you as stereo (two channel) files, that doesn’t mean the sounds in those files are actually stereo.

If you had converted the mono sounds into mono files before importing into your DAW, you would have only used 75 voices (25 stereo voices, 25 mono voices). And the plugin usage would have only used 75% of your CPU. That means you would have more room to add additional processing where needed. So as you can see, it makes a lot of sense to sort this out before you start mixing, to allow you to get the most out of your DAW system.

Method 2: Split Into Mono Files in your DAW

If you are using Pro Tools, you could simply import all your files as stereo, and use the “Split Into Mono” command. This is a useful feature, but it is fraught with problems. And it’s really not feasible for dealing with a large number of tracks.

Using “Split Into Mono” will create two new mono tracks next to the original stereo track. Each set of mono tracks will be panned left and right. The two mono tracks have a .L and .R appended to the track names. If you are OCD like me, this means you have a lot of manual work after you issue this command.

First, you will need to delete (or inactivate and hide) the stereo track and one of the mono tracks. Next, you need to adjust the pan of the remaining mono track to the center. And finally, if you really want to make it perfect, you will have to rename the remaining track to remove the .L or .R.

If you go back to our original example case, you would have to do this procedure 25 times, once for each mono sound. In the end, you would gain the advantage of using fewer voices and less CPU, but it’s a very time consuming and laborious process to get there.

And there’s another problem. Once you complete this manual process, your session folder will still contain all the unused files, so you haven’t gained any additional disk space.

You can also convert the files before you import into your DAW. There are a few utilities out there that will allow you to split stereo files into mono, and other utilities that will allow you to rename files, or you could rename them manually. But again, this is a very time-consuming process, and very monotonous. With a reasonably large session, you might be talking about an hour or more of busywork, when you really would rather be mixing.

With either of these two methods, there is another thing to think about: user error. Audio files are not going to be clearly identified as mono or stereo, so you need a trained ear to listen and determine the format. And even if you listen to a file and it sounds mono, how do you know it doesn’t change to stereo in one part of the file? If you are spot checking the files, you could easily miss this and incorrectly convert a stereo file to mono.

As they say in infomercials, There’s Got to Be a Better Way!

Well luckily, now there is a better way. I know you’re not supposed to use a blog post for promotion or sales, but it just so happens that I have developed an application to handle this whole process. And I think it’s going to help a lot of people. It is called StereoMonoizer, and I’m pleased to announce that it is finally available.

About a year ago, I was using Method 2, described above. When that got to be too much to deal with, I switched to Method 3 and found a few utilities that did various parts of the process. But it was still a nuisance, and very time consuming, so I started searching for an audio application to do everything I needed. When I found nothing, I decided to create my own.

By this time, if you’re still reading this you are definitely in the same boat, so I recommend you head over to www.soundizers.com and check out StereoMonoizer. It’s best for you to experience it for yourself. You’ll find that what used to take an hour or more in session preparation, will be done in one or two minutes. It will be accurate, quick, and painless.

And that means you’ll be able to get to mixing that much sooner.